Aims to deepen once FAITH, IDENTITY & LOVE FOR THE COUNTRY by standing firm to the truth of righteousness, love of neighbours and key characteristics that molds and identify the uniqueness of Filipinos among other races. To empower Filipino people to achieve GREAT THINGS in life and to succeed in their own gifts.

Our beneficiary is Grace to be Born was founded by Bro. Rey Ortega in August 2008 and we began actual operations and service on May 9, 2009.It is a ministry dedicated to saving the unborn from abortion, providing sanctuary to unwed pregnant mothers in crisis, and temporary shelter for abandoned babies. From 1979 to the present, they have ministered to more than 200 mothers in crisis. More than 200 mothers had actually lived in our GTBB shelter and delivered babies. They provide them with free lodging, free meals daily, toiletries, ultrasound, laboratory exams, pre-natal and post-natal care, normal and /or caesarean delivery. For mothers who are incapable of bringing home and taking care of their babies, we help place these babies for adoption or place them in the homes of foster parents. 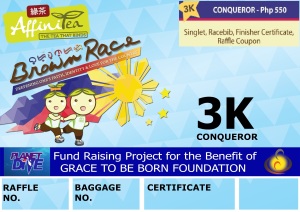 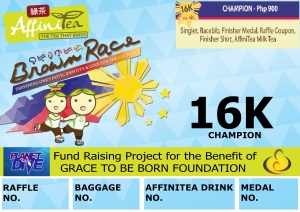 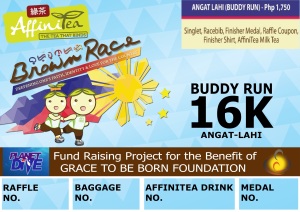 Register online at http://www.affiniteaphilippines.com/ starting from September 5 to November 30, 2014.

Register at the following stores: 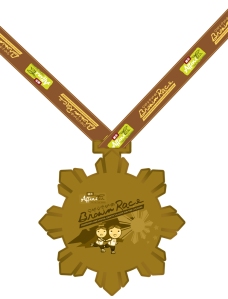 All finishers in all categories have a chance to win the grand prize of Affinitea franchise.

*Appliances and Special Prizes to be raffle on the said event.

6.  The drawing will be held on race day, December 14, 2014 (Sunday), after the race at Cultural Center of the Philippines grounds Liwasang Ulalim City of Manila.

7.  Verification procedures will be enforced to ensure validity and authenticity of raffle entry.

8.  Winners will be notified via announcement during the event.

9.  Prizes are such as Minor Prizes is non-transferable and Grand Prize is transferable and will only be awarded to those who hold the matching race bib and is present during the raffle drawing.

10.  Prizes will not be convertible to any cash value.

11.  Winners and participants agree that AffiniTea Philippines will not be held liable for any incident that occurs during the acceptance or use of the prize won.

12.  All decisions of AffiniTea Philippines and its agents are final. Objection will not be entertained.

13.  Employees of AffiniTea Philippines, its affiliates, distributors, suppliers, advertising and media agencies, and DOH-FDA as well as their relatives up to the 2nd degree of consanguinity are not eligible to participate in this Drawing.

14.  These terms and conditions are subject to any law of the AffiniTea Philippines Management and organizer. 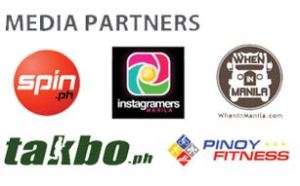 “Running is a form of exercise that is good for our heart but knowing that every stride you’re doing you are saving an unborn child is precious, not only good for the heart but also good for the soul.”

See you then guys.  May God bless you with strength, endurance and good health.

Only now that I had the courage to share my Milo Marathon adventure, maybe I’m still disappointed with the outcome.

I was so excited for it. I even bought new gear for the event as I want to be more comfortable while running. My running buddy and I really prepared for it. Despite of my work schedule, which is from 6am – 2am, we make it a point to train every Tuesday and Thursday at 4:30am. We are running a minimum of 16k-21k on those days. Our main problem is our weekend LSD. I have work every weekend at 6am. So to be able to train, we start running at 12 midnight of Saturdays until 5am of Sundays. After that, I go straight to work at 6am until 2pm and after my shift, then there I can sleep. Our LSD always comprises of across cities adventure, usually Makati to UP Diliman (via Buendia, Mandaluyong, San Juan, Araneta Ave, Quezon Ave then UP) and back to Makati (via Kalayaan, Pasig, BGC then Makati), and this is a 43K route.

Maybe due to my work schedule and training, few weeks before the race event, I got severe vertigo attack. Making me misses my work shift for few days and made me go back to my anti-vertigo medicines. Nonetheless, this has never stopped me from training.

Days before race day I’m still having vertigo attacks but I still manage to train, studying how to cope with dizziness while running and I learned a technique, not to look down or do abrupt turning of my head from side to side.

The night before the race, I was nervous thinking what if I got dizzy the next day and won’t be able to run.

On race day
As my alarm goes off, I started to got up and felt lightheaded and a little bit dizzy. To prevent further dizziness, I took Bonamine, geared up and took off. While travelling towards the venue, I told my running buddy that I’m feeling dizzy but manageable. He told me that maybe I’m just nervous. He told me not to be nervous as I have enough training. 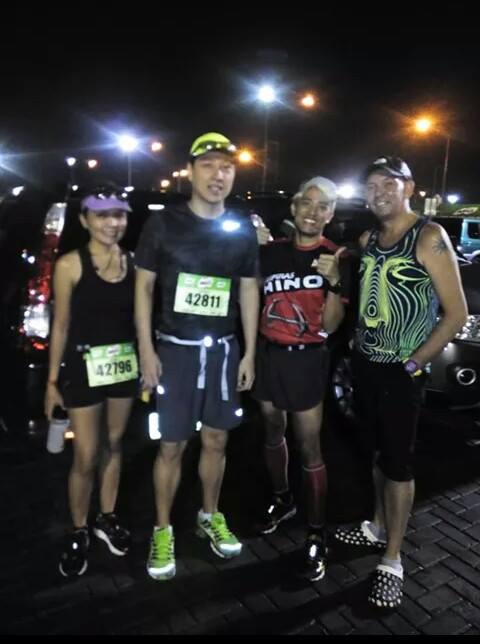 At the parking lot with my running buddy, Ino and one of the founder of FRD team, Benj Termulo

Let the game begin
Before the gun start the usual routine is to have warm up regimen. As I am feeling dizzy then, I refused to.

As the race started, my running buddy started his usual pace, “mamaw” pace. I tried to pace with him but after a few kilometers, I was left behind. As I traverse the Roxas Boulevard, took U-turn to Luneta, my phone rang and it was Ino sounding worried and asked where I am. I told him that I was already done with the first U-turn and on my way to Buendia flyover, toward the second U-turn at Costal and he was relieved and told me that he was looking for me and thought I might felt dizzy again. As I reached the second U-turn which is approximately 10km mark, I checked my watch and it’s only 1hr and 15mins. Wow! Nice.

After crossing the U-turn at Costal, we will take left turn on Buendia Taft, crossing the LRT station. The area was so dark as it was only around 4am. Avoiding to look down to prevent dizziness, I overlooked an uneven ground. My right foot slipped and twisted. Luckily, I didn’t fall and I manage to run. My pace is still consistent as I reached my 21K mark at 2hours and 35min. Yes! I can make it to my 5:30 target finish. As I reached the Kalayaan flyover, I felt my right thigh aching. I disregarded it and continue my uphill run. As I reached BGC, across McDo Forbes Town, I bumped in to Ino who was running back to Kalayaan flyover. I told him that my right hip is aching and I was limping a little bit. He asked me if I’ve religiously taken my salt sticks and power gels, I told him I did. He told me to stop and rest for a while but I didn’t, thinking that I might alter my nice PR. As I was running toward the Mckinnley Road crossing, my phone rings and told me to stop and look for medics. I saw one in front of Essensa. The medic put some ice on it and asking few questions regarding what had happened. Hardheaded, I decided to run again towards the last U-turn at the junction near Army Gym. As I reached the U-turn, the pain worsen. So i decided to do run-walk strategy. As I reached One Bonifacio building I saw a medic station. I asked for a pain reliever, they gave me mefenamic acid. In my thoughts, ” don’t you have much stronger pain medicine?”… Hehehe

Still looking good, not yet injured

As I reached the 30km marked I called Ino, I was crying. I told him I might not make it as the pain worsen and I was only walking.  He told me not to give up. There’s still time, I still have 1hour and 30 mins to make the 12km. I know I can do that.. if only I can run but I can’t. He also told me that he was also walking as he suffered leg cramps and headache. Luckily, he saw Mark Montilla and assist him until he reaches the finish line.  Thank you bruddah. 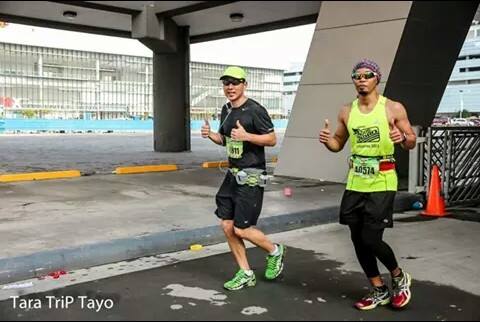 Ino with Mark Montilla ,who assisted  him on his last 3K

As I traverse my last 1Okm, I met Erick. He look so exhausted but told me that we can make it. As my pain medicine take effect, I manage to run. I tend to put my weight to my left to avoid further pain on my right but I realized that if I will do that for 10km, I might injure my left side making it more impossible to run… Ever!.  So I decided to do what my diva friends taught me “the power kembot”. As I passed through Erick, he asked me if we can make it as he was looking so tired. I told him “let’s do power walk”. As we traversing the PICC area, I saw my co-diva Angela Abad. She was walking, looking tired, I grabbed her hand. I told her “let’s do power kembot”.  The pack where I belong are all looking tired. I am not that tired, I’m in pain. If only we can switch legs… (That was my thoughts).

As we reached the MOA ground, there are no marshals anymore. No one to guide, so we got lost. Luckily, Erick found the right route. Traversing the last 200 meters, Erick whining that we might make it if only we were guided properly. We can take shortcut but we can’t because we will put our team to shame (he’s from PAR and I’m from FRD) and it will not be a glorious finish.

As we cross the finish line, running friends cheering. I was crying and limping and they are the only one made me smile. When I reached the finished line at 6 hours and 30 minutes, I realized that there were no medal marshalls. Ouch!. No medal. No certificate. So sad.  I am so disappointed.  My running buddy also was disappointed.  Maybe we are over-trained or maybe we started too fast, or maybe it’s just a bad run but nonetheless, we both thank the Lord that we still finished the race despite our pain and injuries. I also would like to thank my running buddy, Ino for encouraging me during my low moments while running the route.  Thank you bestfriend for not giving up on me.

My journey towards 42K

After all my sacrifices and hard training, it’s really hard for me to accept my failure but as other runners may say “there’s always will be a bad run but nonetheless, it’s still a run”.  It may not be easy but still you finished it.  Every pain that you experienced gives you courage to be even more stronger and be a better person. 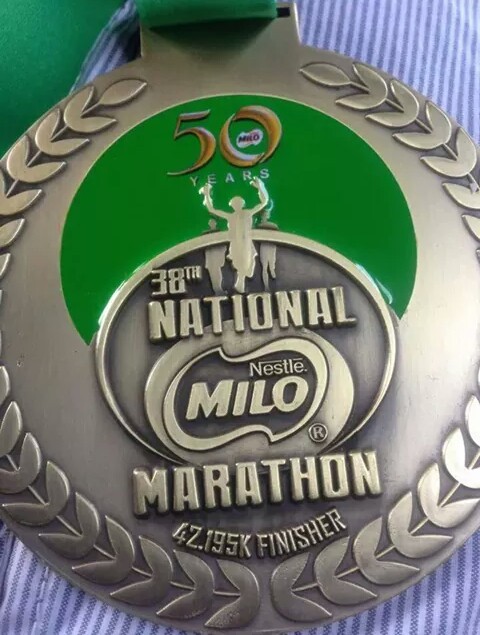 I may not have you right now. Still I am proud to say that I finished the race with dignity.  And remember this Milo Marathon, this is not my end in running… I am not a quitter… I am a fighter… Revenge is mine… See you next year!