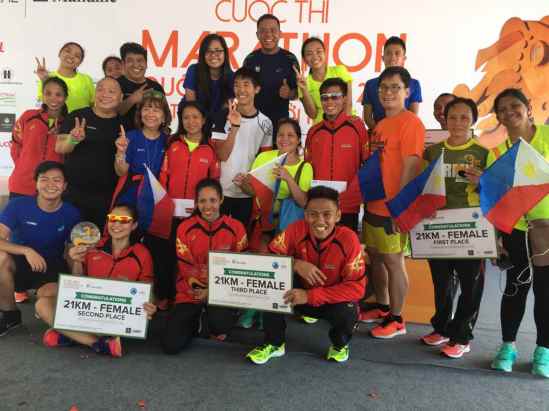 Lany Cardona of Pangasinan cruised through the 42km race to land as the champion of the women’s division, finishing the course in 03:27:26 while Rafael Pescos of Davao finished second in the men’s division with a finish time of 02:40:06. Richard Salano, a member of the Philippine Army secured the third spot in the podium of the 21km race with a finish time of 1:20:36 while the trio of Jho-An Banayag-Villarma (01:31:53), Nhe-Ann Barcena (01:37:08) and Ruffa Sorongon (01:37:38) swept the first, second and third spots of the 21km women’s category.

“Masaya kami kasi ang 7-Eleven ay walang sawa na pinadadala kami sa ganitong international race.” said Lany Cardona who together with Rafael Pescos were given a slot to race in the Shonan International Marathon happening on December in Kanagawa, Japan with all expenses paid, as part of their prize for winning in the 42km category of this race.

Nine Filipino runners participated in this morning’s race, four of them in the full marathon while five in the half-marathon – a fulfillment of the commitment given by Philippine Seven Corporation (7-Eleven Philippines) to the top 3 (male and female) marathon and full marathon winners of the 7-Eleven Run that was held in the Filinvest City, Alabang last February.

According to Project Head Ms. Michelle Saludes, “We at 7-Eleven want to give Filipino runners not part of the Philippine Team the opportunity to showcase their abilities and be recognized in an international competition.”

Local and foreign participants coming from 50 countries, competed in the Da Nang International Marathon 2017 where the route brought the experience of running through Da Nang’s beautiful coastline passing the bridges across the poetic Han’s river in the middle of the city during sunrise.

This is the fifth year that 7-Eleven Philippines has brought Filipino runners to an international race giving them full support from taking care of all expenses, pocket money and with the help of sponsor Asics Tiger, a complete race suit.

“We will continue to encourage runners who aspire to represent the country in an international competition through the 7-Eleven Run Series which we are planning to expand by having another race in Cebu before the year ends and which will serve as a qualifying race to the 7-Eleven Run happening in Manila next year.” shared Mr. Jose Ang Jr., General Merchandise Division Head.

© [Redg Candido] and [OneReyna], [2015 and onwards]. Unauthorized use and/or duplication of this material without express and written permission from this site’s author and/or owner is strictly prohibited. Excerpts and links may be used, provided that full and clear credit is given to [Redg Candido] and [OneReyna] with appropriate and specific direction to the original content.
%d bloggers like this: