Project 50 PR Brief:
We’ve come across many OFW stories one way or another. Still among us are those who have romantic notions of the kind of lives they have abroad. People could not see past the pasalubongs and the happy photos OFWs post online, which is worrisome because in reality not all OFWs live the good life abroad. But they would not talk about it. Some would not share their every day situations abroad and would rarely admit that they get lonely.
Their reason is understandable. They naturally display strength because most of the time, they are all their families have. They expect themselves to be the strong-willed ones because they have to in order to provide their family the best life. Their hopes and dreams are for those they left behind. They are, in fact, the prime epitome of a caregiver.
But even carers need caring. And honestly, they are the ones who need it most.
What we know is this: The reason why Skype and Messenger are one of the most used apps by OFWs is because these somehow make them feel like they never left. It is their temporary remedy for longing and missing out. Still, it falls short in making them feel the care and love from home–– especially at a time like Christmas.
And we thought, if Home would make their Christmas, yet they could not come home for it, let us send home to them. So in the spirit of giving, Biogesic wanted to move families to care for their ultimate providers, the givers of care who are thousands of kilometers away. And we did this through the very first Biogesic Banig-bayan program.
Inspired by the balik-bayan box, Biogesic created a special package for families here to carry items they would want to send. It could hold anything from items they miss from home to symbols of life events OFWs would wish they were a part of––truly pieces of home that would make their Christmas whole.

The Banig-bayan carries the message that Ingat and care would still be felt even if they are apart. Biogesic inspired families to make their OFWs feel they are loved, remembered, and missed. And by the deep expressions of gratitude, heart-tugging stories, and tears of joy, the Banig-bayans would make all the difference for their Christmas to be truly merry and immensely felt.

WHAT IS A RUNNER’S TROTS?

It is any bathroom break during or after a run, characterized by cramping, flatulence, diarrhea, and urge to defecate.  This is common among long distance-runners.

WHAT ARE THE CONTRIBUTING FACTORS THAT CAUSE RUNNER’S TROTS?

HOW TO PREVENT THE RUNNER’S TROTS?

Here are some suggested management strategies:

How to prevent it during the race? 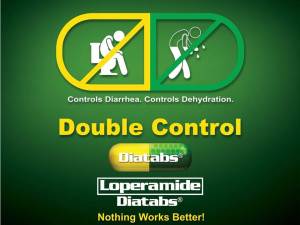 An RUPM baby ever since

I started running in December 2011 and all my first endeavors was with Run United.  In 2012, they conducted a running clinic which I joined as a beginner.  I learned a lot from that clinic.  I learned how to be strong not only physically but also mentally, proper nutrition, and proper preparation.

Run United Series gave me so much memories and for this year, I am paying it forward.  This year, I played not as a runner but as a pacer.

And last October 4 at Run United Philippine Marathon, I played as a 42K pacer at 6:30 pace group.  It’s not my first time to pace someone for a full marathon but this is my first time to be a part of a 42K pace group, not as a co-pacer but a lead pacer, and I only learned that few days before the race… hahaha.  I was so nervous then due to many things going on my mind.  I have been sick few weeks before the race and I lack ample time to sleep due to my graveyard shift work. Nonetheless, I already planned for everything; the pace time, the strategies and how to motivate and encourage runners to join our group.  I coordinated with Ate When, my co-pacer about our strategy.  My bag was ready, complete with my race day regimen.

As I planned, I woke up around 11:30 pm to get ready and reached the event place at exactly 1am which is the 42K runners’ call time.  I saw excited runners doing some stretching and some taking photos.  As we are preparing for the gun to start, some runners approached me, asked for groupie (showbiz lang ang peg) and others just gave a wave.

And off we go…

As we planned, we are running at 9mins/km pace.  We are one big barangay!, mostly consist of first time full marathoners and other who just want to enjoy the route.  Our group is so big and loud.  We are having a good time chitchatting.

When we reached the Buendia route going to the Kalayaan flyover, I introduced to them the “kembot pace” where in you sway your hips a little bit making your foot roll, making some of your running muscle take a rest and other muscle group work, making you run longer and stronger.  This works great during uphill, giving less stress to the knees.  But take note, this only works for slower pace only as the heels tends to drop first, then rolling towards mid foot to toes.  Faster pace needs to be a midfoot drop for quick transition.

Runners are enjoying the kembot pace especially when we are traversing the BGC route, which is a surprise for us to run along Bayani Road but it made easy by the “kembot pace”.  Upon traversing the Kalayaan flyover back to Buendia, I realized some of the runners are already tired; so when we reached the first 21-km mark along Buendia, I decided to do some stretching for a minute to loosen up tight muscles.  I led the stretching and many runners joined including runners that are not in our pace group.  As we travel along the Roxas Boulevard toward Luneta, we realized that the kilometer marker does not  jive with our GPS watch.  So, I told them that the next stretching break will be at the 30-km mark and after that, we will do Galloway technique at 8:30.  When we reached the Seaside Boulevard near One Esplanade, the runners are shouting “Whoooooo! ang aga pa natin” (around 6:20 hours) but when we turned right at the corner, we realized that we still have the last U-turn.  That last turn was hell for them.  It was hot, humid and they are so tired.  I understand them as so I am but I was amazed with the runner’s perseverance to keep up with their goal.  I saw them how they push themselves just to keep up with us.  I saw myself to them, at my first full marathon. I told them, “Laban!.. konti na lang!.. para sa unli-rice!” 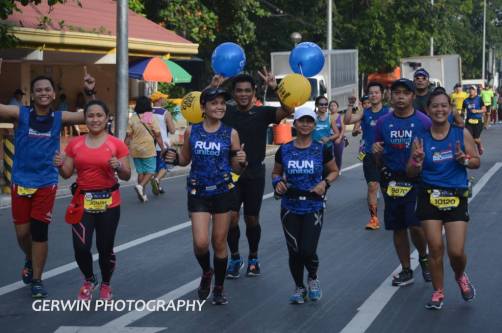 We are one big kembot barangay

We finished the race exhausted, tired and hungry but with happy heart.  But my heart was happier due to numerous gratitudes that I received.

The feeling is priceless that cannot be replaced by a fee.  Yes, we do not have a fee but we do not regret it. It’s an advocacy to pay it forward.  IT’S ALL FOR THE LOVE OF RUNNING!

some of the pacers from various pace group…. We are not yet here as we are still running by that time 😦
photo credit to Leslie

I would like to thank Unilab Active Health, Runrio, Ms. Zeny Mejia, Ms. Vimz Mendoza, and Bards Bathan  for giving me such privilege to be a part of the Run United Pacer group and taking good care of us.

I also would like to thank the runners in our pace group for such a wonderful experience.  I had fun running with you guys.  Until next run.  See you on Run United Recovery Run on December 12, 2015.

And mark your calendar guys, here is the ULAH 2016 Calendar.  Save those dates.  Exceed Yourself!

My nutrition that day:

I’m the type of runner who is dropping the glucose level tremendously during the race.  That’s why I always bring energy gels during races especially in full marathons.  Before, I am using a certain power gel religiously.  Taking it every hour but the effect of it only last for 45 minutes so when I reached 1-hour mark, my energy was low and I was very hungry.  Not until Unilab Carbgel was introduced to me.  It is loaded with carbohydrates to boost your energy and last longer.    What I have observed is that, unlike my previous gel that only last for 45 minutes, when I reached my 1-hour mark, I’m not yet hungry but I just have to take one just to maintain my energy and it did.  CarbGel is available in 2 fruity flavors.  You can purchase them at Unilab Active Health site. 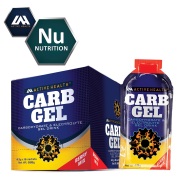 Before I was a runner wannabe, having a hard time finishing a 5-km race.  Then in 2011, I joined Unilab Running Clinic with coach Rio as our mentor together with other coaches.  I learned a lot from them not only running tips but also good and healthy nutrition and Enervon Activ was introduced to me.  From 2011, I joined the ULAH Run United Series.  The Run United Trilogy brought so much memories to me.  My first 21K was done at Run United Philippine Marathon in 2012, my first 42K was at Run United Philippine Marathon in 2013 and last year, 2014, I made my first 50k.  All throughout my running adventure, Enervon Activ has been my buddy ever since, giving more energy, strength and stamina throughout the race.  Giving me strong finish and fast recovery after the race.  That’s why Enervon Activ will be still my buddy in my future running endeavor.

WHAT SEPARATES A MAMAW FROM EVERYONE ELSE? 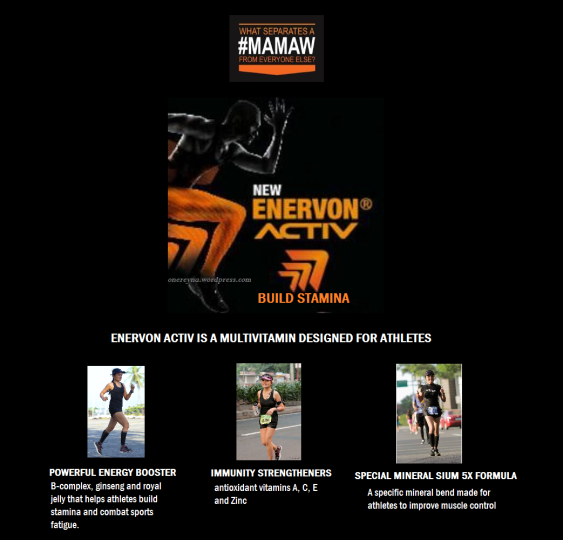 It is a bike and sports gear raffle promo in which you can win a bike, sports gears and a lot more by just purchasing Enervon Activ.  Promo period will be from June 15 to October 15, 2015.  There will be consolation prize winners every month.

EXCITED?… WANT TO KNOW MORE?… HERE ARE THE PRIZES… 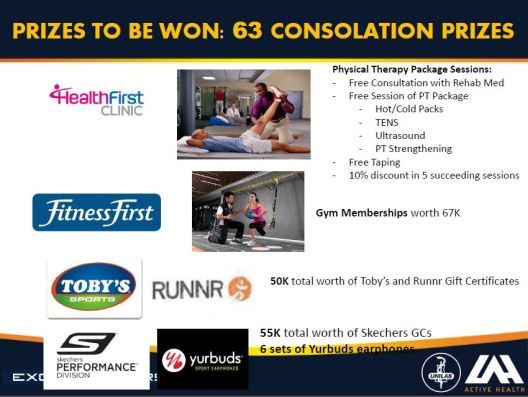 For more details, click to visit the ULAH promo:

The much awaited third leg of Run United Trilogy, The Run United Philippine Marathon, is now here with more exciting event especially for the first time full-marathoners.  All 42K finishers will have run along the red carpet in their own finish line at One Esplanade.

Other categories will have their finish moments at Seaside area of Mall of Asia.  The event will also cater 5K and 10K categories.

Excited already?… Here are the details: 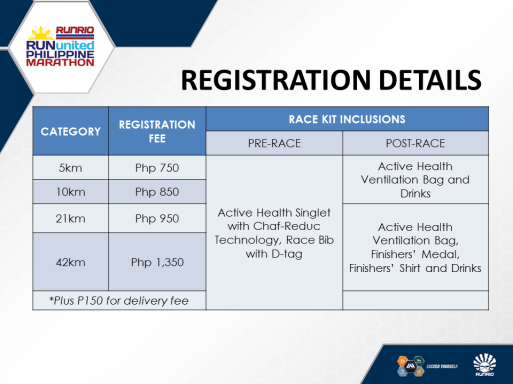 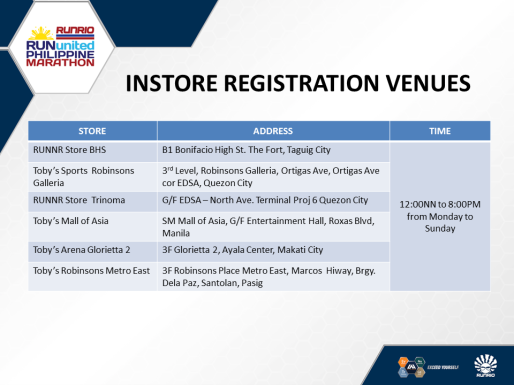 It will be my fourth year in joining the Run United Philippine Marathon and I am an RUPM baby ever since.  My first 21K was in RUPM 2012, my first 42K was in RUPM 2013 and last year also memorable as I got a new PR for 42K.  This year, I will again add another memorable moments in my running adventures and hope to see you there.